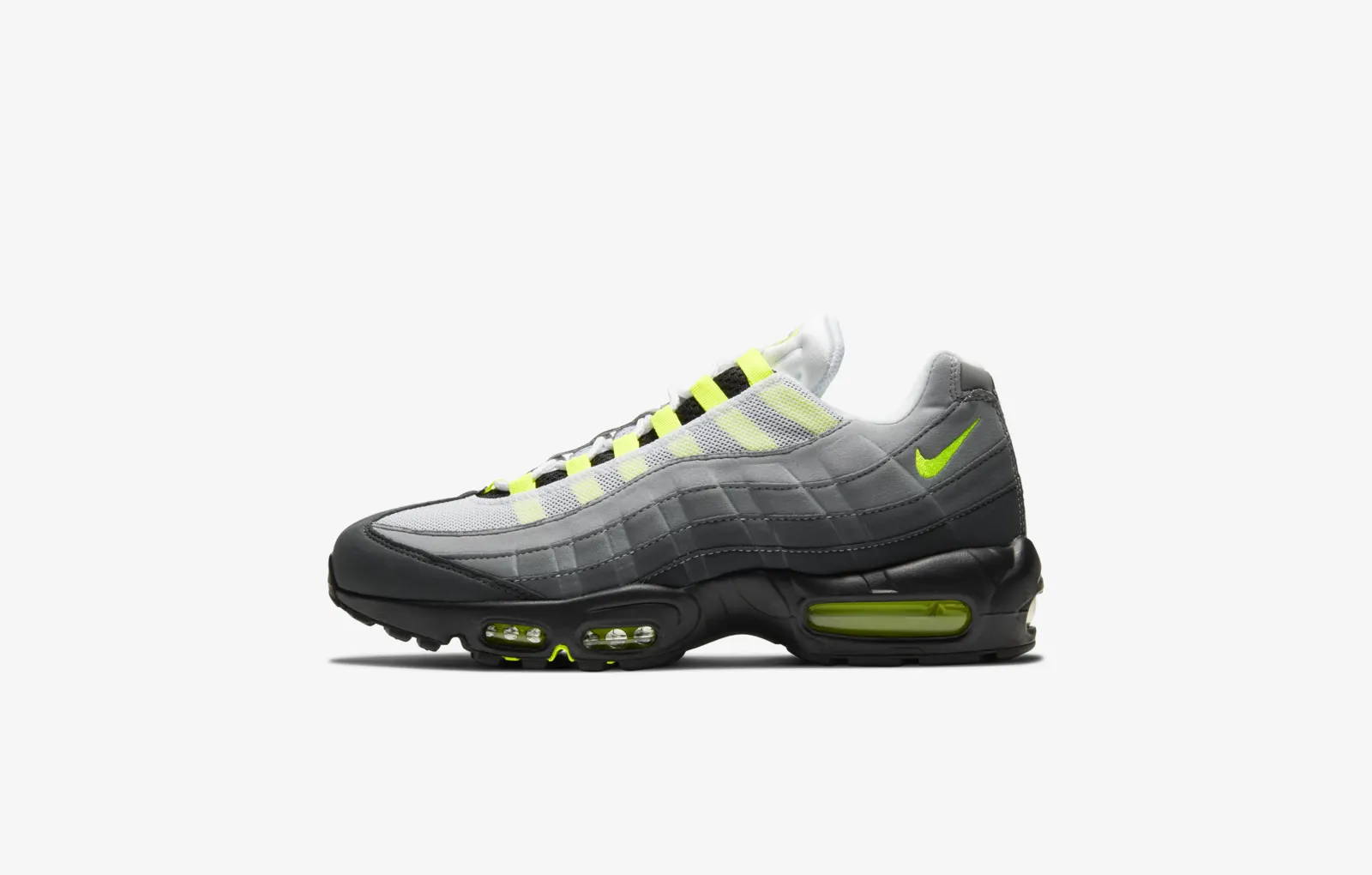 More of two decades have passed since the launch of the Air Max 95, which, at the time, broke paradigms of performance in the race. Very different from the products sold in the 90s, the footwear drew a lot of attention mainly for its bold design in shades of gray and neon yellow.

The person responsible for the boldness was Sergio Lozano, Nike's shoe designer. Since the day he was recruited to work on the Air Max project, his commitment to perfection, as well as the dedication of the entire team, have made the Air Max 95 go through numerous revisions until it reached its unusual final form for production.

Like the Air Max 1, which was considered too innovative at the time of its launch, the design developed by Lozano also faced some resistance. “The first evaluation of the Air Max 95 concept was not a complete success. Some people saw tennis as a good idea, but others did not like it at all ”, recalls Lozano when telling about the obstacles he faced during the creation of the model. But, thanks to an encouraging team, he followed up with his visionary idea and created a shoe to match the name and legacy of the Air Max family. “Great professionals supported the idea and, without their support, the shoes would not have been produced” , concludes Lozano. 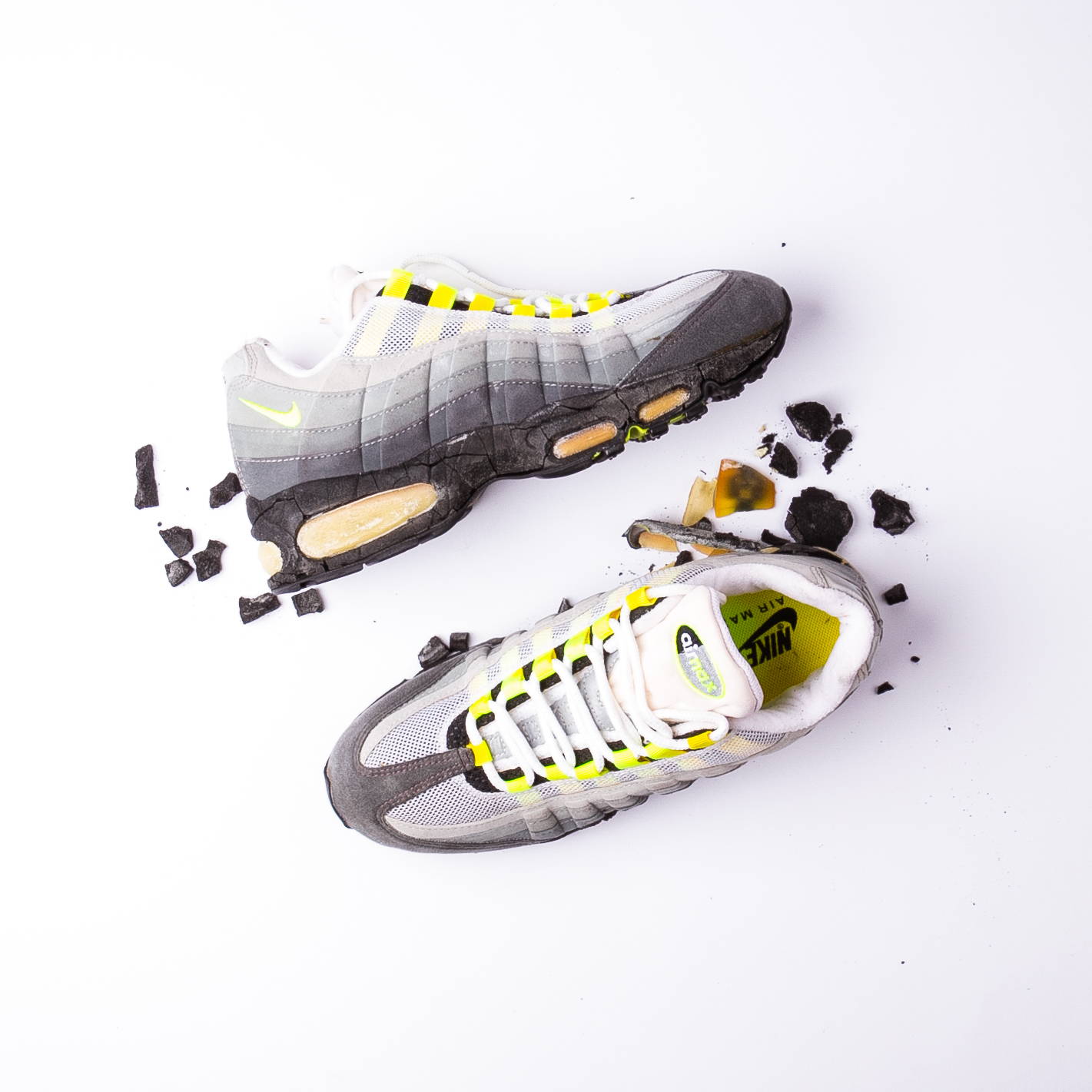 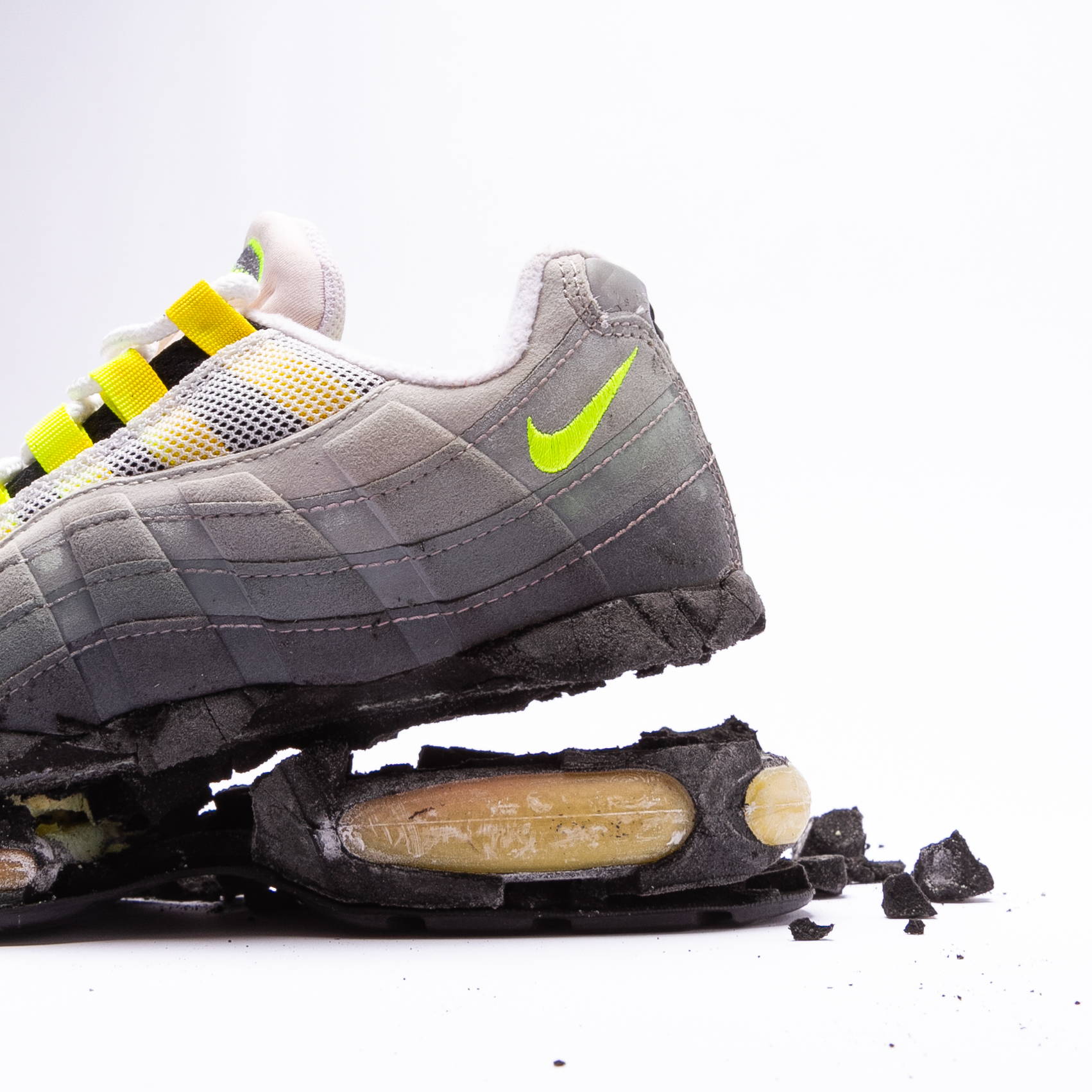 “The first evaluation of the Air Max 95 concept was not a complete success. Some people saw tennis as a good idea, but others didn't like it at all ”

In the 90s, the popularity of running at Nike gave way to the rise of basketball. And, being aware of the influence that this sport had on that generation, the racing team knew that they needed to innovate in order not to be left behind. It is not by chance that the design of the Air Max 95 was developed exactly to bring back the energy that involved racing in the 70s and 80s. For this, the new model had to be bold, intriguing and different from everything that had been produced before. . “The design team wanted to mix concepts, they wanted to take risks. And I think I was that risk, ”recalls Lozano.

Before 1994, Lozano had never worked on the development of a racing product. Until then, its main focus had been the creation of products for training (gym) and tennis. However, the sudden change was not a surprise, the work in several product categories was already part of the creation process at Nike. With only four years in the company, the young Lozano was then called to lead the newest project of the Air Max family. However, unlike what he himself imagined, his conceptual journey had already begun. That's because, well before being recruited for the project, the designer found the inspiration that would give rise to the Air Max 95 during a rainy afternoon. “I was looking beyond the lake, to the trees, and I started to imagine the process of rain causing erosion on the land. Then I thought it would be interesting if the perfect product was dug up by erosion ”, says the designer. He made a quick sketch, with streaks similar to those found on the walls of the Grand Canyon, and kept it in his ideas drawer. 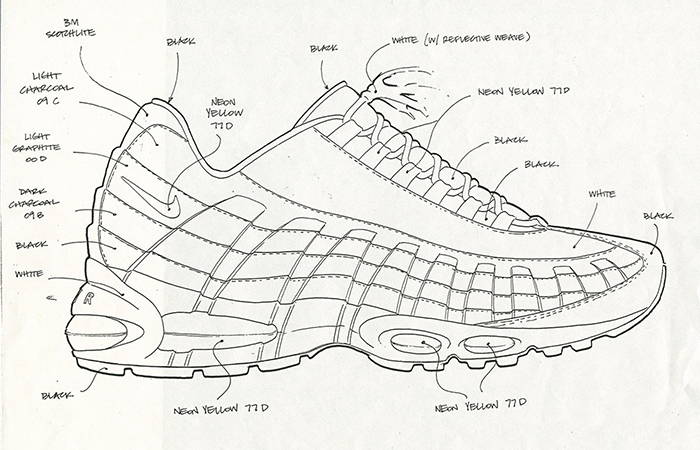 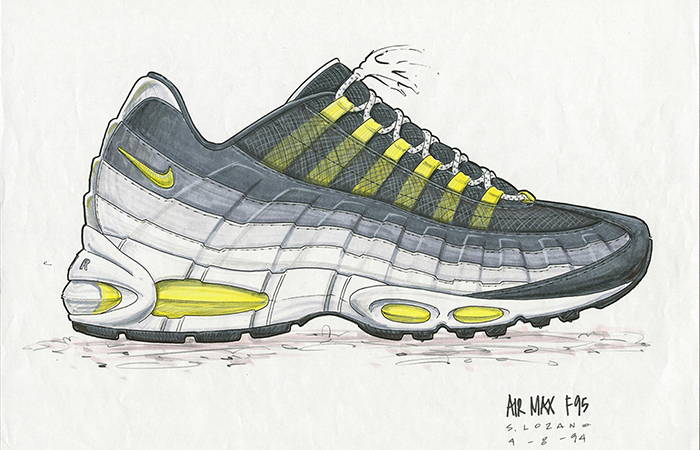 The outline remained intact until the initial Air Max brainstorming sessions began. To reinvigorate the Air Max family, Lozano would need to direct it to a truly unique path and the sketch made that rainy afternoon ended up bringing the answer he was looking for. Based on it, Lozano and his team started by introducing visible Air technology on the front of the shoe - offering the latest in cushioning for the runner who wanted a higher level of protection.

Despite his initial progress, a question remained in the designer's mind, "I remember something that Tinker Hatfield always brought up: 'ok, so this is the big design, but what's your story?" Lozano found the answer in some anatomy books in the Nike design library. He became interested in the correlation between the construction of the human body and the basic principles of product design. The rest was simple, "all I had to do was choose the connections that made the most sense". With ribs, vertebrae, muscles and skin typical of the human body as main sources of inspiration, the first prototype of the Air Max 95 was born.

IF IT WEW EASY, IT WOULDN'T BE WORTH IT

The Air Max 95's strength, its uniqueness, was also its biggest obstacle. When the project went into the review phase, Lozano and his team quickly realized that they had not yet overcome all difficulties. The aesthetic was so different that it made some people question its potential. “There were those who loved and hated the product. But you know you're on the right track when you have that kind of emotional reaction, ”explains Lozano. In the beginning, the bold design did not include the Swoosh (Nike logo). Combining this choice with two other unprecedented innovations at Nike, such as the introduction of Nike Air technology visible on the front of the shoes and an all-black sole, was of concern to many. But Lozano and his team did not abandon the project and ended up beating the opposition.

When asked about the little emphasis given to the 'Swoosh' in the Air Max 95, Lozano explains: “We concluded that Nike was already well recognized as a brand, and that, therefore, the footwear design itself should draw attention by itself. Why did we need the Swoosh if we already had visible Air and, on top of that, were we debuting this technology on the front of the shoe? ”. In addition, there was the dilemma of where to put it. The design of the shoe did not allow it to be positioned in the traditional location without disturbing its defining characteristics. In the end, the Swoosh was in the back third of the upper (upper part of the shoe): “we applied the Swoosh as a score”, explains Lozano. 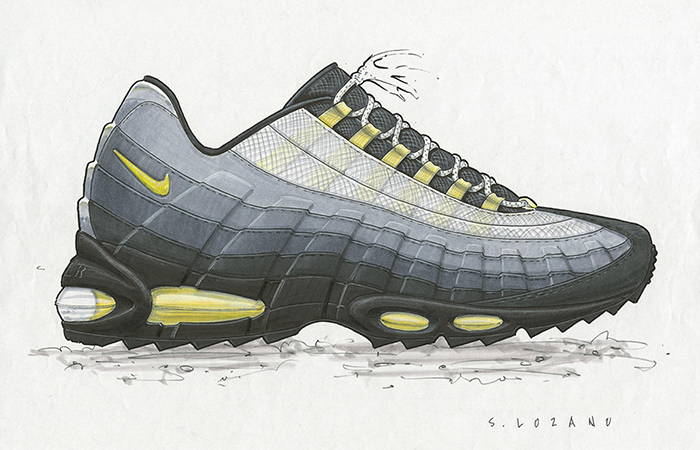 “There were those who loved and hated the product. But you know you're on the right track when you have that kind of emotional reaction ”

With the finished design, it was time to decide on the shoe's launch color. Originally, Lozano chose to make colors as functional as shoes. “In Oregon, people run when it rains, run on trails and, therefore, after the first few kilometers, the shoes already look shabby. I wanted to disguise this appearance a little ”. Always confident in his ideas, Lozano decided to incorporate gray as one of the predominant colors. "I was told that gray didn't sell, and I took it as a challenge." Black and dark gray were used at the base of the shoe, where dirt usually accumulates, while lighter shades were introduced at the top of the model. 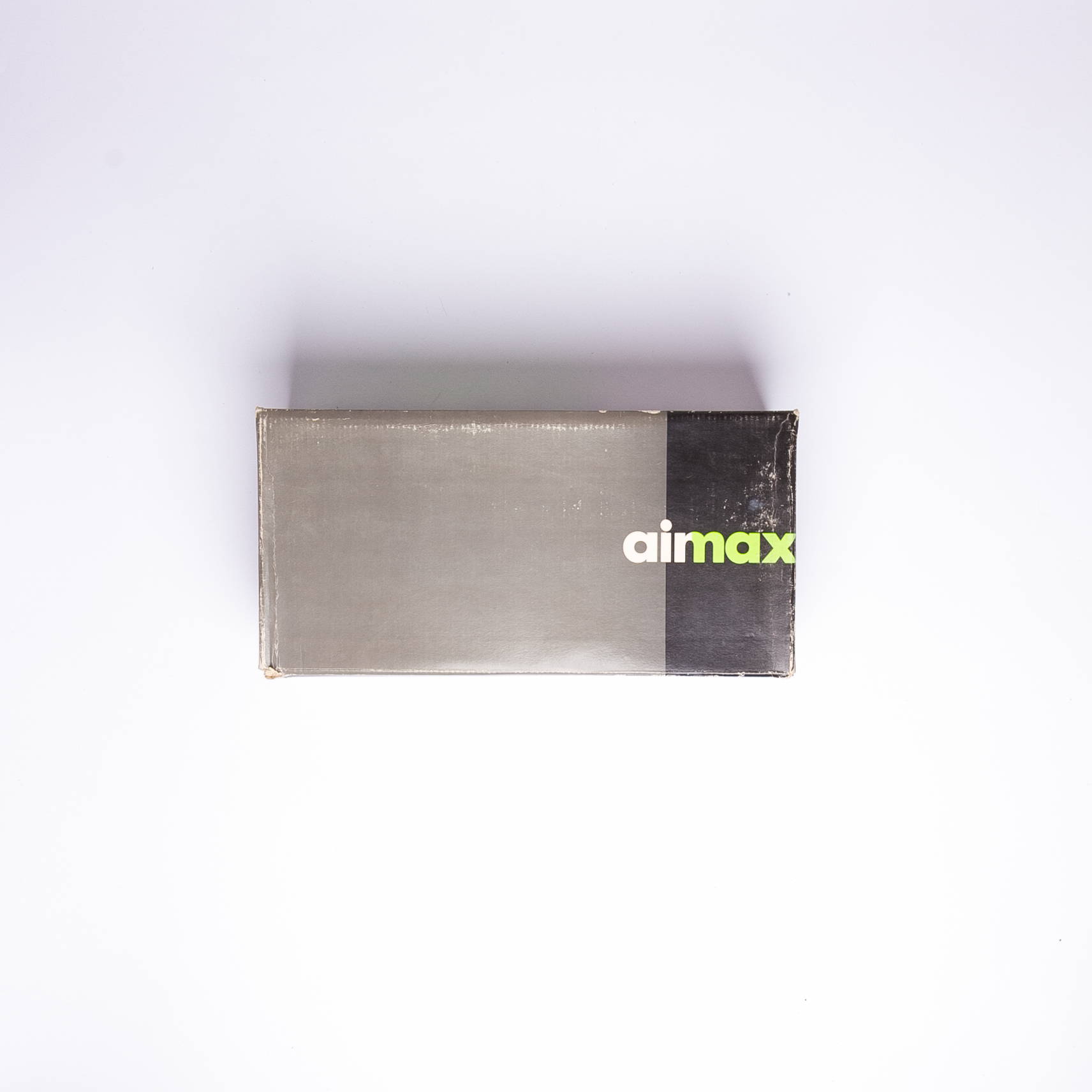 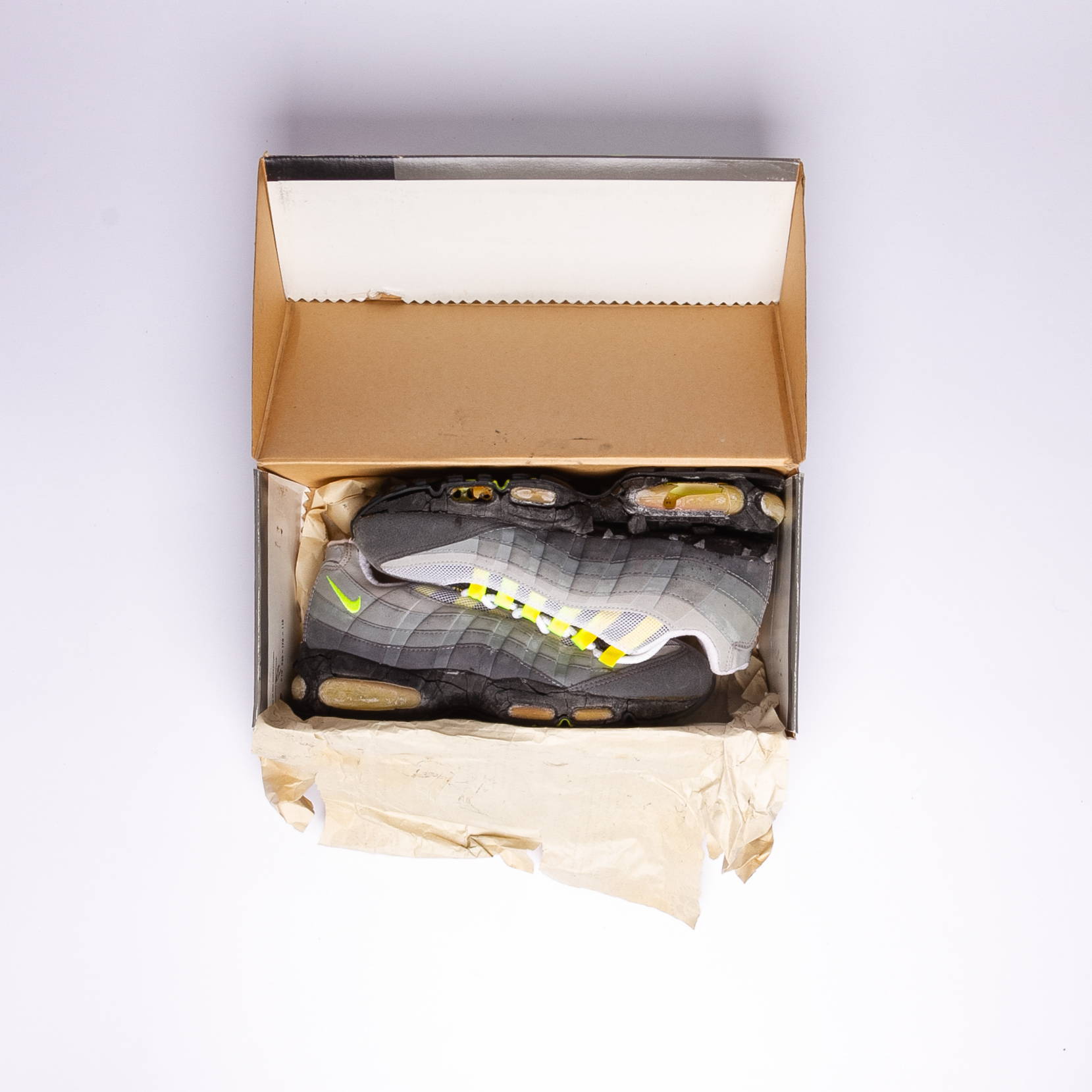